Unwind with Pastini’s March Wine of the Month: Perazzeta “Mercurio” 2018, an inspired combination of Sangiovese, Cabernet Franc and Alicante from the coastal Maremma region of Tuscany.

The Cantina Perazzeta is located in the small village of Montenero d’Orcia, in the upper part of the coastal Maremma region of Tuscany, well suited for the production of big reds based on Sangiovese. This is a hilly district with an ancient winemaking tradition at the foot of the extinct Mount Amiata volcano, with soils very rich in clay and limestone, ideal for growing grapes.

Owner/winemaker Alessandro Bocci is truly passionate about making wine according to traditional methods, capturing a sense of place in each bottle and sharing with the world his love for his land. He is known as one of Italy’s best artisanal winemakers, and for his bold, dense reds. His wines speak of the terroir and exude layers of flavor obtained from the deep root system he so lovingly tends. Spreading his arms wide to display the 200º view of the valley below, he grins, “I have to come work here every day.” And how beautiful it is. Driving up the dusty road to the estate, one is surrounded by olive trees, yellow Scotch Broom, and the occasional succulent.

Once a one-man show, Alessandro is now joined by his daughter, Sara, in the fields, and is also helped by fifteen friends and family members during harvest. The density and complexity of his wines he attributes both to the unusually rich soils of the Montecucco zone, and to the family’s incredible selection standards. “Every year,” says Bocci, “we throw away approximately twice as many grapes as we press.”

In March, Pastini is pouring the Perazzeta “Mercurio” 2018, a delicious combination of Sangiovese, Cabernet Franc and the lesser known Alicante grape.  We know you will love its bold, dense fruitiness that is both full-bodied and accessible. 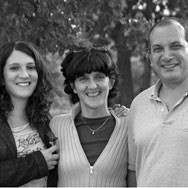